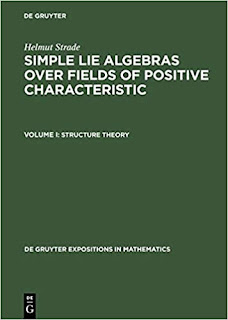 The problem of classifying the finite-dimensional simple Lie algebras over fields of characteristic p > 0 is a long-standing one. Work on this question during the last 45 years has been directed by the Kostrikin-Shafarevich Conjecture of 1966, which states that over an algebraically closed field of characteristic p > 5 a finite-dimensional restricted simple Lie algebra is classical or of Cartan type. This conjecture was proved for p > 7 by Block and Wilson in 1988. The generalization of the Kostrikin-Shafarevich Conjecture for the general case of not necessarily restricted Lie algebras and p > 7 was announced in 1991 by Strade and Wilson and eventually proved by Strade in 1998. The final Block-Wilson-Strade-Premet Classification Theorem is a landmark result of modern mathematics and can be formulated as follows: Every finite-dimensional simple Lie algebra over an algebraically closed field of characteristic p > 3 is of classical, Cartan, or Melikian type.

Environmental Chemistry is a relatively young science. Interest in this subject, however, is growing very rapidly and, although no agreement has been reached...

Control theory represents an attempt to codify, in mathematical terms, the principles and techniques used in the analysis and design of control systems...

Representations of AF-Algebras and of the Group U (∞)
Well Posed Linear Systems, Volume 103
Comment