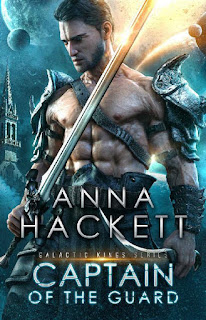 First Claw Annora Rahl is tough, fierce, and loyal. She stands at her emperor’s side to protect the wolf shapeshifters of the planet Damar, and she isn’t afraid to use her claws. Stopping an evil king from a neighboring planet, who’s intent on enslaving all the planets in their system, is her top priority. She won’t fail her family, her people, or her emperor. Even if it means joining forces with an infuriating rival warrior…one who she isn’t sure if she wants to kill or kiss. Captain Thadd Naveri is strong, unyielding, and dedicated. As captain of the guard for the overlord of the planet Zhalto, he lets nothing threaten his king or his people. He’s still recovering from his capture and torture by the enemy, but he readily accepts a top-secret mission into enemy territory. He’s less than pleased to share that mission with Annora the one woman in the galaxy who fills him with scalding hot anger and burning desire.