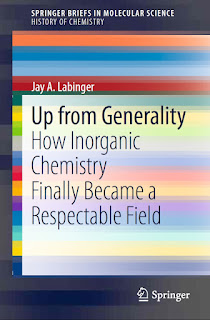 In this brief, renowned inorganic chemist Jay Labinger tracks the development of his field from a forgotten specialism to the establishment of an independent, intellectually viable discipline. Inorganic chemistry, with a negation in its very name, was long regarded as that which was left behind when organic and physical chemistry emerged as specialist fields in the 19th century. Only by the middle of the 20th century had it begun to gain its current stature of equality to that of the other main branches of chemistry. The author discusses the evidence for this transition, both quantitative and anecdotal and includes consideration of the roles of local and personal factors, with particular focus on Caltech as an illustrative example. This brief is of interest both to historians of science and inorganic chemists who would like to find out how their field began.

Ring systems represent a very important branch of organic chemistry. Benzene is perhaps the pre-eminent example and provides the benchmark for the so-called...

Organized to facilitate reference to the reagents involved, this book describes the reactions of the elements and their mostly simpler compounds, primarily...

This book focuses on inorganic nanosheets, including various oxides, chalcogenides, and graphenes, that provide two-dimensional (2D) media to develop materials...