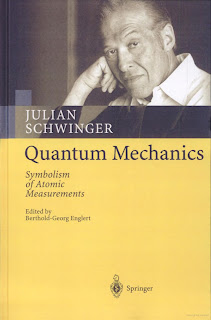 Julian Schwinger had plans to write a textbook on quantum mechanics since the 1950s when he was teaching the subject at Harvard University regularly. * t Roger Newton remembers: [A] group of us (Stanley Deser, Dick Arnowitt, Chuck Zemach, Paul Martin and I forgot who else) wrote up lecture notes on his Quantum Mechanics course but he never wanted them published because he “had not yet found the perfect way to do quantum mechanics. ” The only text of those days that got published eventually – following a sug gestion by, and with the help of, Robert Kohler:!: – were the notes to the lectures that Schwinger presented at Les Houches in 1955. The book was reissued in 1991, with this Special Preface by Schwinger [3]: The first two chapters of this book are devoted to Quantum Kine matics. In 1985 I had the opportunity to review that development in connection with the celebration of the 100th anniversary of Hermann Weyl’s birthday. [ . . . ] In presenting my lecture [4] I felt the need to alter only one thing: the notation. Lest one think this rather triv ial, recall that the ultimate abandonment, early in the 19th century, of Newton’s method of fluxions in favor of the Leibnizian calculus, stemmed from the greater flexibility of the latter’s notation.