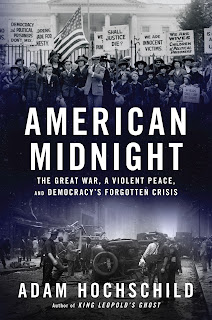 This was America during and after the Great War: a brief but appalling era blighted by lynchings, censorship, and the sadistic, sometimes fatal abuse of conscientious objectors in military prisons—a time whose toxic currents of racism, nativism, red-baiting, and contempt for the rule of law then flowed directly through the intervening decades to poison our own. It was a tumultuous period defined by a diverse and colorful cast of characters, some of whom fueled the injustice while others fought against it: from the sphinxlike Woodrow Wilson, to the fiery antiwar advocates Kate Richards O’Hare and Emma Goldman, to labor champion Eugene Debs, to a little-known but ambitious bureaucrat named J. Edgar Hoover, and to an outspoken leftwing agitator who was in fact Hoover’s star undercover agent. It is a time that we have mostly forgotten about until now.